Between 1898 and 1902, three large winegrower cooperatives were established in the Hallgarten area, making Hallgarten the leading wine cooperative center in the Rheingau. During the same period, the Boer War was taking place between British and Boer colonialists in South Africa. Owing to the historical consciousness of the time, the three cooperatives carried nicknames given to people who lived in the village of Hallgarten. The first cooperative, founded in 1898, was called "die Deutschen" (the Germans)to honor the first villagers who decided to work together to produce wine. The second cooperative was founded in 1902 and called "die Englander" (the English) because its members had to have a minimum of ¾ of a hectare of vineyard land and therefore were thought to be a little richer than their counterparts (England at the time 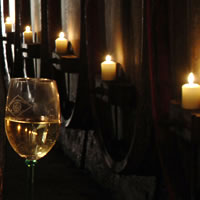 was known as the "banker to the world"). A third cooperative was also founded in 1902 and called "die Buren" (the Boers). Anyone could join the Boers, regardless of the size of vineyard; it was thought to be the poor cousin to the other cooperatives. In 1970 the Germans and the Boers joined together. In 1989 the Englanders joined the two others, and in 1999 the cooperative's general board voted to call the organization the Hallgartener Winzergenossenschaft eG.