Adam von Itzstein (1815 - 1848) was a well-known political figure whose contributions to the political dialogue in the early 1800s figured prominently in the development of a modern, post-World War II Germany. Adam von Itzstein lived in Hallgarten and had a vineyard and winery there. Because of his love for Hallgarten, his reverence for the land and the wine it produced, and to commemorate his 150th birthday, we honor Adam von Itzstein with a special line of wines. 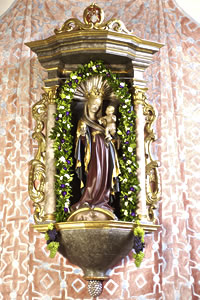 One of the many legends that grew up around the Hallgartener Madonna was that of a local farmer who purchased a barrel of wine from a local vintner for a marriage ceremony. On the way home from the winery the barrel fell out of the ox cart and broke open, spilling the precious contents on the ground. The legend goes that as the farmer prayed to the Virgin Mary (Jungfer) to come to his aid, a young woman stopped by the cart, miraculously repaired the barrel and using a small jug, refilled the barrel from the puddles of wine on the ground. Around 1400 a church in the middle-Rhein region of Germany erected a statue depicting Mary with her small jug, a statue referred to as the "Madonna with the Pottery Jug", the "Hallgartener Jungfer", or simply as the "Beautiful Hallgartener".